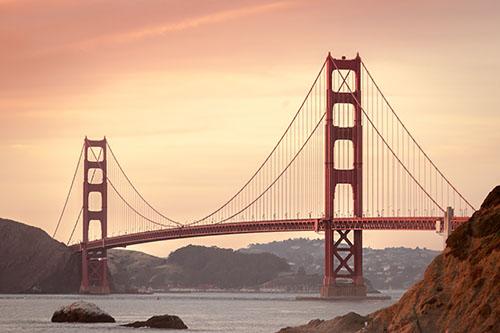 When the Golden Gate Bridge was due for a seismic retrofit, Channel Lumber had the lumber products to help make it happen.

No structure is more iconic, or more identified with San Francisco than the Golden Gate Bridge.  The Bridge was opened in 1937 and spans from San Francisco to Marin county in the north. It is the most photographed bridge in the world.

It was originally expected that the Golden Gate Bridge would be painted gray. The grandeur of the structure, however, allowed the designers to convince all involved to make a bolder statement, and thus it is now painted “International Orange”, a color adapted from the primer used on the bridge during its construction.

The Golden Gate Bridge suffered no observed damage during the La Prieta Earthquake in 1987, which caused deaths of 68 people, and an estimated dollar loss of over $6 billion.  Following the quake the Golden Gate Bridge Highway and Transportation District (GGBHTD) engaged a team of consultants to conduct a vulnerability study. The conclusion was a 7.0 or greater earthquake near the bridge could cause considerable damage, potentially resulting in a shut down. With an earthquake of 8.0 there would be substantial risk of impending collapse.

We are proud Channel Lumber signed on to ensure the safety of the Golden Gate Bridge. The retrofit project is now far enough along that the primary concerns and vulnerabilities have been addressed, and the bridge is safer than ever for vehicles and pedestrians.