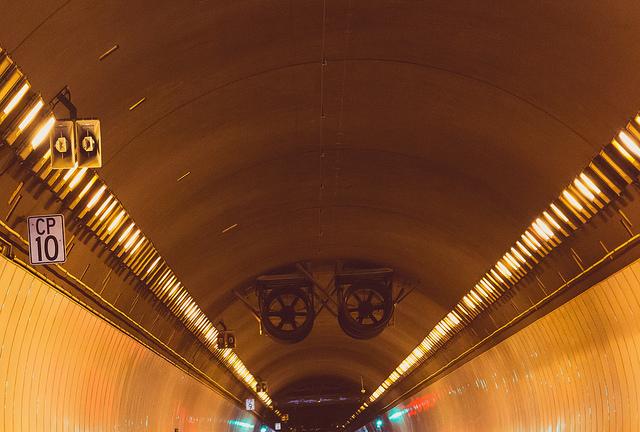 Traveling south from Pacifica to Montara, along California’s majestic Highway One is a section of highway known as “Devil’s Slide”. Aptly named, Devil’s slide has a long history of rockslides, slippages, erosion and closures. The original road was built in 1936 and was permanently closed to cars in 2013. Today, it remains open to hikers and bikers, who can enjoy the breathtaking views, and explore the WWII headland bunkers.

As early as the 1950s, plans were being made to bypass Devil’s slide with an inland highway. Each proposal was eventually dropped, usually due to public opposition and environmental concerns. A plan for a tunnel was eventually proposed. It faced debate and opposition as well. At one point it was discovered that CalTrans intentionally inflated the cost of the tunnel to turn public favor to the highway solution. The costs were re-calculated and the plan for the tunnel was approved.

The internationally recognized tunnel, named after beloved Congressman Tom Lantos from San Mateo, has won numerous awards for design, engineering, safety, and environmentalism. The project features two 4,200-foot tunnels, and a 1,000-foot bridge. The project was managed by HNTB who implemented the New Austrian Tunneling Method. The NATM is a method which utilizes the natural geography to maximize strength and support. The engineers study the geography as the bore and build, making decisions as they go based on they encounter underground. The tunnel is extremely well rated for seismic events.

Please contact Channel Lumber for more information about our products and services.