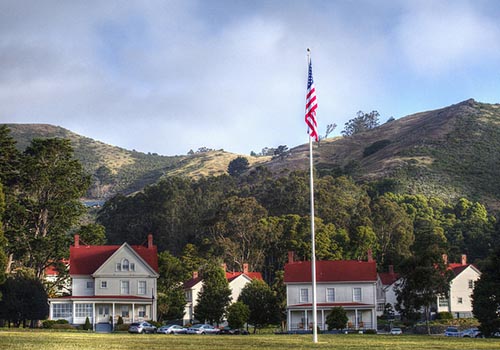 In 2008, Fort Baker Sausalito became Cavallo Point Eco Lodge. The restoration project cost $103 million, with products and services provided by Channel Lumber. Originally constructed between 1901 and 1910, Fort Baker Sausalito was a military base built to guard the San Francisco bay. It stands on the north side of the Golden Gate, directly across from Fort Point.

The base housed military personnel, features several batteries, and consists of 25 historic buildings, including a bowling alley and munitions storage. The original buildings were constructed of now archaic materials such as old growth timber, unreinforced brick and stone masonry, and cement plaster walls. As much as possible, these materials were restored and reused. However much had to be replaced, like rotted wood, with new materials made to match the original.

Photographs of the original construction were referenced during the restoration. This was done primarily to remove several modifications that were made between 1930 and 1945, and restore the buildings to their original design. In keeping with Channel Lumber’s mission to maintain the highest standards of Green Building, Cavallo Point was built and is maintained as sustainably as possible. It has been honored with LEED® Gold Certification from U.S. Green Building Council. Cavallo Point is the First National Park Lodge and the First on the National Register of Historic Places to be honored with Leed Certification. Photo Credit