Evolution of the Sawmill 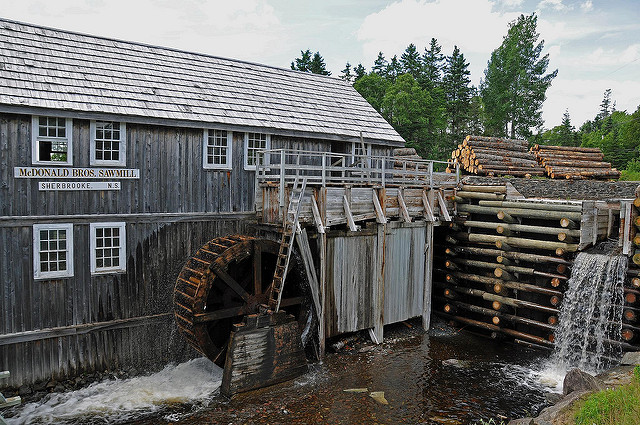 The earliest type of sawmill, or lumbermill, was the sawpit. The sawpit was a pit over which the log was positioned and held in place by saddle blocks. The “top” sawyer would balance himself atop the log, and guide the blade for accuracy. This required strength, stamina, and skill. The “bottom” sawyer worked in the pit below, primarily providing muscle. The pit was often a basin of water, and the pit sawyer had to battle a constant downpour of sawdust. The two men used a two handled “whipsaw” to rip the lumber. Using this system the team could produce roughly a dozen boards per day. This was tough, demanding work.

Sawpits were integral to early ship building. As early as the 3rd century AD, the water powered mill was invented, and was widely used up until the industrial revolution. The water powered mill operated essentially the same way as a modern mill with respect that uncut lumber enters at one end and cut/dimensional lumber exits at the other end. The watermill used basic crank and connecting rod technology. As the watermill evolved, eventually water was also used to float the timber into position, thus alleviating the need for intensive manual labor to handle the timber.

Windmill sawmills were also prevalent during this time period, and used the same connecting rod technology, simply substituting wind power for the water wheel. With the arrival of the industrial revolution, several advancements were made, First, the circular saw had been invented. The greatly increased the speed of production, while decreasing maintenance needs. The second improvement was the introduction of the steam engine. This had several impacts. First, because of steam engine trains, lumber could be easily transported in larger quantities. Previous to the train, mills had to be built near rivers or lakes, which were the primary means of transporting heavy timber. With the train, sawmills could be built on site, wherever they were needed. An added advantage was that timber by-products, sawdust, branches, unusable timber, etc. could be used to fuel boilers and kilns. Today, sawmills have advanced to become highly efficient, computer controlled machines. The saws themselves are similar to their predecessors, with faster,  better components. Now when log arrives at the mill, it is analyzed by lasers which tell the machinery which types of cuts will provide the most yield. Furthermore, 100% of the wood fiber is used. The sawdust, chips for the kiln, bark for mulch, and miscellaneous pieces for paper, or composite forest products are all maximized. For more information on Channel Lumber millwork, or other products and services, please contact us. Photo Credit: Dennis Jarvis